A downloadable game for Windows

It is not far from Navekat and Suyab to the lake they call the Eye of the World. But the visions you sought there carried you much farther, across mountains, deserts, marshes, across the Mother River to the lonely Mount Beyaz. Here, perhaps, you can convince the merciful goddess who lives above the clouds to save your people from the plague.

Beyaz Dag towers solitary above the deserts. No rival peak dares rear itself nearby, though a desultory range of hills stretches southwards. The mountain's western slopes fall off steeply into a deep blue lake; north lie the marshes that fringe the Mother River.

You never mastered sword and lance, like your brothers, but can shoot, ride, and wrestle as well as any of them.

Beyaz Dag teems with life: hyenas and gazelles in the desert scrub, deer, wolves, bear in the forests. Travelers you met on the Northern Road tell of other, darker things here: ruins, abandoned quarries, sunken grottoes...

Now you're almost through the marshes; the mountain rises to the southwest.

If you are unfortunate enough to get into a fight, you'll see messages in your log like:

All effective skills are reduced by: exhaustion, wounds, bleeding, intoxication.

Exhaustion accumulates as you walk, climb, or fight; it can be reduced by food and drink.

Wounds accumulate from combat; if wounds ever exceed your maximum hit points (36), you fall unconscious - and since you have no companions it's assumed you die.

Bleeding sometimes occurs during combat; once you're bleeding, you'll continuously lose hit points until they reach 0 and you die. First aid skill and the application of bandages are necessary to stop bleeding.

Intoxication is a side effect of some beverages or other events in the world.

Built in Python on top of libtcod, Jotaf's tutorial, and other open-source components. Source code at https://github.com/Naburimannu/beyaz-dag. 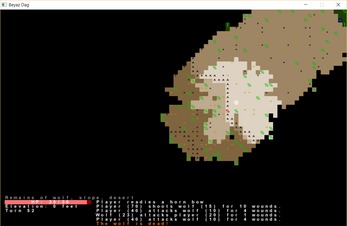